The fruity hot cross bun has long been popular in Australia.

And we think that's for good reason; the flavour is well-balanced with warming spices, the dried fruits bring along a mild sweetness, and the soft, flakey bread has us coming back for more.

Whether you enjoy them fresh or toasted, with butter or with honey, alone or with family, in the morning, the arvo or at night-time, we know one thing for sure: you're not alone when it comes to adoring this treat.

Here are 6 surprising facts you may not know about the famous hot cross bun! 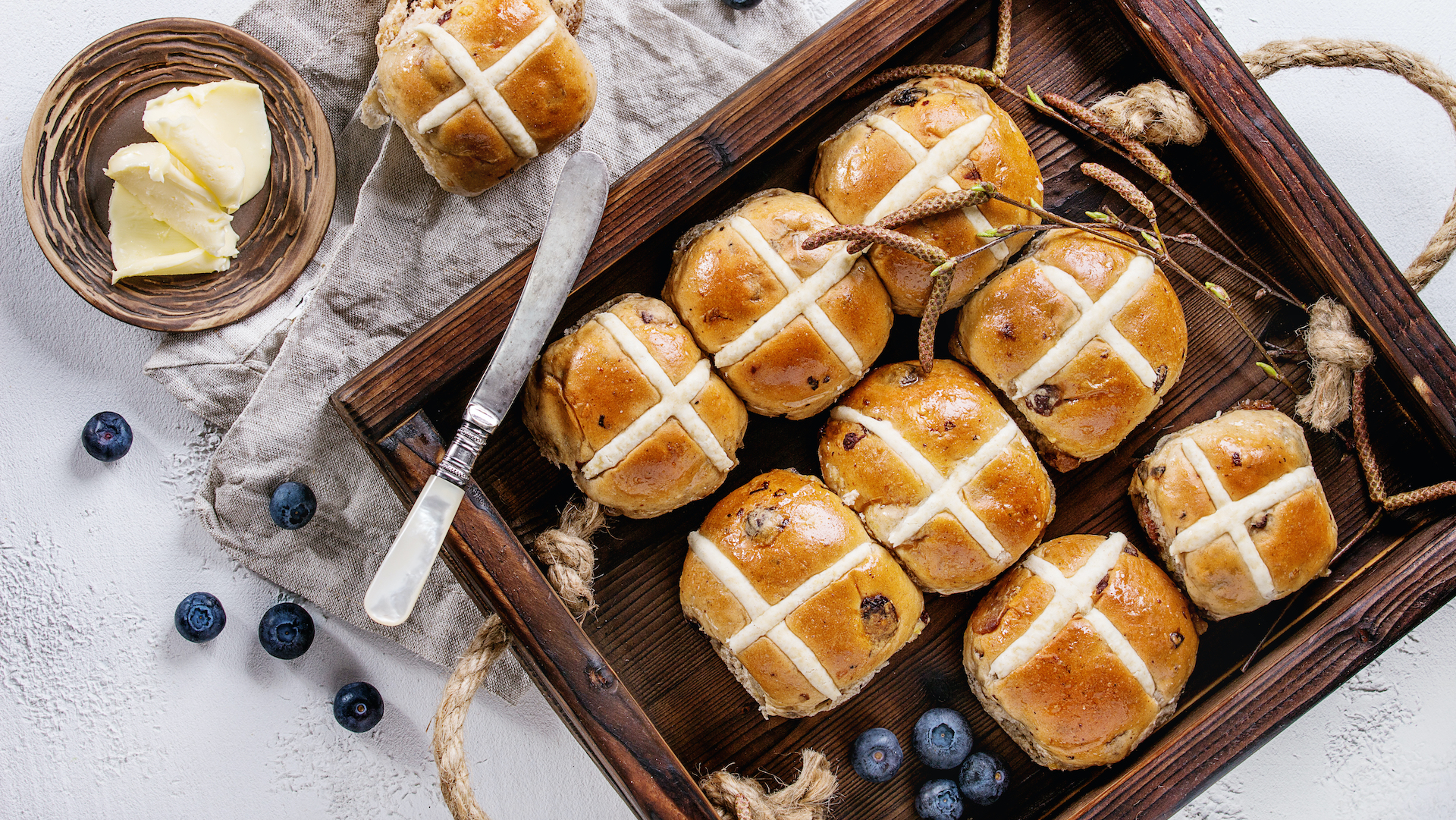 Some believe that the buns date back to Pagan times in England, at a time where Christian missionaries found it difficult to change the religion of English pagans. The missionaries did, however, notice that the pagans had a sweet tooth, eating cakes (made from wild honey and rough grains) in honour of their goddess “Spring” and the providing Mother Earth. Hence, the missionaries altered a confectionary bun from the Saxon era by adding a cross on top and started spreading it among the Pagans.

Others believe that the bun is a Catholic tradition. In the middle ages in England, Catholics would travel miles to worship on Good Friday whilst fasting. Worships would last the entire day, and it could be hard on the elderly. Therefore, hot cross buns were invented and sold in front of church doors.

Today, hot cross buns are not just enjoyed in Australia. Since the bun originated in England, most countries where Englishmen settled have the custom of eating the bun. This includes Ireland, Canada, New Zealand, South Africa, and of course Australia.

2: Once, the bun was in danger

In addition, the wages board at the time decided on giving employees a raise on Good Friday to double their salary, which would also discourage the production and sales of the bun. But thankfully, as we now know, the hot cross bun survived and is still popular today.

According to old tales, sharing a bun creates a friendship between people. An old custom states that holding a hot cross bun together, saying the following rhyme, and then breaking the bun in two, will cement a friendship; “Half for you, half for me, Between us two good luck shall be”.

4: Once, the buns were thought to be magic

In the mid-1700s, people superstitiously believed that the bun would never go bad. In an almanac from 1753, poor Robin wrote: “Whose virtue is, if you’ll believe what’s said, They’ll not grow mouldy, like the common bread”.

Therefore, people would save the buns for an entire year until the following Good Friday. If someone were to fall ill during that year, they were given the bun to eat as a remedy. Similarly, the Chamber's Book of Days says: “Hot-cross buns, if properly made, will never get mouldy. To make them properly, you must do the whole of the business on the Good Friday itself. The materials must be mixed, the dough made, and the buns baked that day (…)”.

Some also used to believe that the bun insured their home from fire. By keeping a hot cross bun in your home, it would (in addition to healing the sick), make a home fireproof. Supposedly, a fire could never consume a house that contained the charmed bun. Today, we know that other measures like smoke detectors and water are probably a better strategy when it comes to fighting fire.

5: There are countless versions

You can find countless different versions of this tasty baked good in Aussie stores. The most popular are raisin, plain, and chocolate buns. Other options include brioche, apple & cinnamon, mixed fruits, gluten-free, vegan, wholemeal, and mini-size.

6: You can make your own

Making your own hot cross buns is easy! Just like with other baked goods, all you need is some simple ingredients, a bit of effort in your kitchen and patience. It's also easy to add whichever ingredients you love; whether that's chocolate, Nutella, macadamias, cardamom, or dried apricots.

And of course, if you'd rather save the time and effort, simply head to the Dinner Twist Marketplace and order a bag of hot cross buns for delivery. Here, you'll find either freshly baked hot cross buns from Perth's very own Artisan Bakery Abhi's Bread, or soft, gluten-free chocolate buns from Perth-local Gala Bakery.

Previous
Waste Not: 5 Alternatives to Plastic Bin Liners
Next
3 Interesting Facts About Anzac Biscuits
we believe
in local VIEW BOXES
POPULAR POSTS
RECENT POSTS
ABOUT DINNER TWIST
We love good food! It's time to reclaim your dinner. Delicious home cooked food, in no time at all. We believe good food is not just what you can taste.