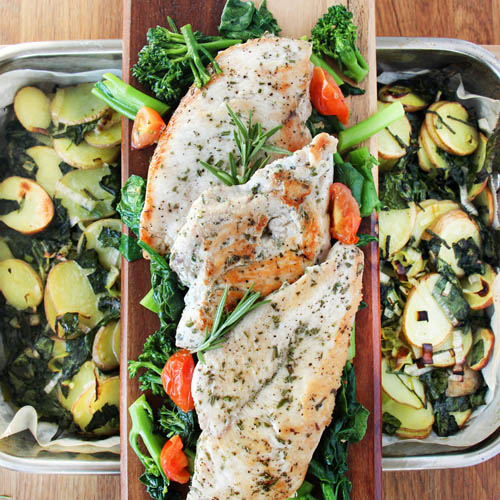 2. Wash, trim and slice spinach. Thinly slice potatoes and leek, toss with half of the spinach, tarragon, olive oil and 1/4 cup water. Layer thinly in an ovenproof dish, season well with salt and pepper.

4. Season schnitzels with salt, pepper and rosemary. Heat a large pan with oil over medium-high heat. Cook schnitzels for 3-4 minutes on each side, or until golden and cooked through. Set aside and keep warm.

Tip!
Use a mandolin to thinly slice potatoes evenly.
Dried tarragon can be replaced with thyme.

salt and pepper, for seasoning
Enter your details – it's quick and easy
You'll need to join up to Dinner Twist to place an order, if you're already got an account, log in now!